Enter “My First Book of Zombies.”  The premise: Zombie Survival Guide for Kids.  Zombies are a part of popular culture that continue to stand the test of time.  The written works of Robert Kirkman and Max Brooks have been extremely successful in their own right while the accompanying television shows and movies continue to exceed expectations.  Meanwhile, a search of Amazon for “zombie children’s book” yields few results and nothing for children birth to 6.

Kids books love focusing on trucks, foods, princesses, construction vehicles and things that are pink.  Why not zombies? I think the answer boils down to the misconception that zombies are not appropriate subject matter for kids.  The critics claim that mindless creature whose sole purpose is to feed on the flesh, and sometimes brains, of humans does not make for a warm and fuzzy pre-bedtime read.

Good point but look at the local Halloween isle and see vampires, mummies and werewolves.  Why haven’t zombies crossed over into the mainstream of spook?  I think the time is right and “My First Book of Zombies” is the perfect entry point for kids of any age but targeted for 0 to 6.  The story is told through the eyes and words of a 5-year-old girl and her little sister.  It focuses on practical details and information about zombies and life alongside zombies.  Forget kill or be killed and exchange it for two little girls learning how to coexist and assist zombies.  That zombie looks dirty and smells stinky.  Let’s give him a bath.

The story is short, simple and served with a solid amount of tongue-in-cheek references that parents appreciate and kids find funny.  Finally, parents can escape answering questions about fire trucks and begin pontificating on the pros and cons of life with zombies.  A winner for bedtime or anytime. “My First Book of Zombies” is complete and I am searching for willing publishers to make zombies a mainstay in the mainstream.

The binge on all-things zombie has been going on for about two years.  Triggered by repeated encouragement to give AMC’s The Walking Dead a try, I finally checked out Netflix’s offerings.  The opening sequence of the cautious Rick Grimes searching for gas before he and the audience discover a young girl converted into an oozing, festering, teddy-toting zombie.  Cue up the string-heavy opening sequence with broken picture frames on the wall.  Sold!

The fascination in the show shifted to the comic and then to the genre as a whole.  When I found myself up-to-date on the show and the comic, I brought Max Brooks into my life.  In The Zombie Survival Guide, Max Brooks presents zombies in a way I have not seen prior.  Rather than being driven by fear-fueled desperation as illustrated in “Night of the Living Dead,” Brooks approaches the threat of zombies in an objective, rational way.  Let us ignore the idea that Brooks’ use of zombies is an allegory for any type of social challenge or threat.

Spending hours engaged in various zombie media began to raise questions from the youngest members of the household.  Whatcha reading, dad?  A book.  What’s it about?  Zombies.  What’s a zombie?  Well, (this question was a bit harder to answer) zombies are guys that just kind of walk around and … um.  Naturally, I wanted to leave out aspects of undead, fevers, viruses, flesh-eating and the collapse of civilization, as we know it.  So, what’s left?

Not wanting to discourage young inquisition, I went with “Zombies are guys who think your toes are sandwiches” and I proceeded to do some toe-biting.  The situation ended with laughs which is always counted as a victory for a dad.

The process of explaining zombies to the kids continued over the months as I thought of how Brooks would do it.  Provide the information in a clear, factual way and allow the audience to perceive it how they will.  Zombies don’t eat regular food is much different than saying zombies instinctively crave the flesh of humans.  Just as, “zombies can hold their breath for a long time” is different than saying, “zombies don’t need to breathe because their pulmonary, cardiovascular and central nervous systems are inoperative.” 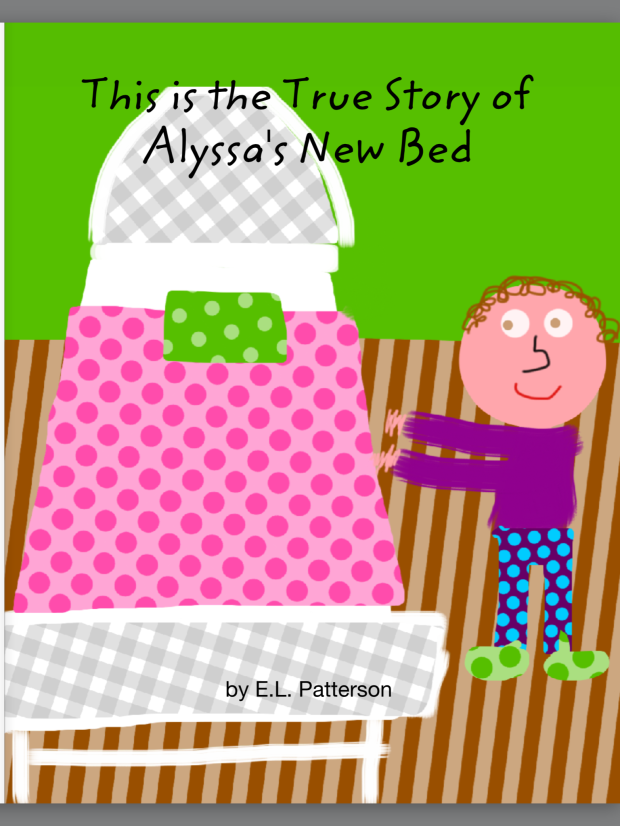 Long before I was writing awesome children’s picture books about zombies, I was writing equally awesome children’s picture books about transitioning from a toddler bed to a full-sized bed. That was my first venture into the world of literature and, judging from the response of publishers, it was quite successful. Does the sarcasm translate? Much like the zombie book, the plan was never to write a children’s book until I … well … wrote a children’s book.

The mattress was delivered and I, severely misinformed, did not have the slats needed to prevent my beloved from crashing to the floor. The lure of the new bed was hard for the girl to resist. Waiting for mom to come home so I could head to the store to pick up some 1x4s, I needed a distraction. I picked up my guitar, played a few power chords (because that’s all I have mastered in 20 years of playing) and boom.

So soft and cozy for my head.

The girls surprisingly loved it and the diversion worked. The song had a good beat and you can sing along. Turns out the bed was soft and cozy for her head. I guess life does imitate art.

It was the most requested song of late 2012 and early 2013. It needed to be cemented into history and based on the content, rhyme and length, a children’s picture book was the option that made the most sense. The children’s part was covered; the picture part was not.

Searching around the app store, I found Drawing Carl. I have no idea who Carl is but his app was pretty cool. Designed for kids and appropriate for a terrible artist like me, I began sketching loose translations of the girls in the basement and the significant stages of the new big bed.

Each drawing took about an hour that was comprised of me trying to draw a circle, hitting the undo button, circle, undo and circle again. Turns out the circles are really hard to draw. People must be using compasses or protractors; maybe some sort of string/ pendulum setup. Regardless, circles are hard, but I cheated in some spots by reusing backgrounds and only changing colors of clothes.

Words on a legal pad and pictures on an ipad. I was told this does not constitute a book. I tried shutterfly, picaboo and snapfish figuring that I could make a photo book then add the text. This was mostly an utter disaster as the book shapes did not work or the templates did not allow me to split the sketch across two pages.

Head hanging low with the weight of failure, I discovered blurb: A website with the primary purpose of creating books of all content, shapes and sizes. I painstakingly pieced the drawings in place and added the text. Ordering with the upgraded imagewrap cover and glossy paper made the finished product look legitimate when it arrived to the door.

We read “The True Story of Alyssa’s New Big Bed” every day for six months. Alyssa would sing it to herself at bedtime, able to recall each word due to the frequency of exposure. Obviously, Random House and Harper-Collins passed but the satisfaction in creating something that was so well loved proved remarkably rewarding.

Five grand would have been remarkably rewarding as well. Oh well.

One thought on “Children’s Books”